Jesus is Now a Mormon 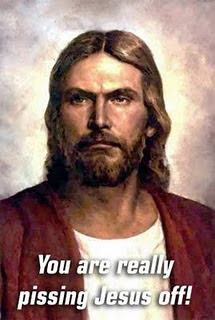 I think Jesus would disagree that he wanted to be baptized Mormon. But as you know, Mormons love to baptize the Jews, and Jesus was a Jew and Mormons say no Jew shall be left unbaptized.

Researcher Helen Radkey has discovered what she believes to be records for proxy temple ordinances performed on behalf of Mary (Jesus’ mother), Jesus Christ, and Mary Magdalene. Ms. Radkey writes,

Ms. Radkey says her research also turned up recent proxy temple ordinances on behalf of Jesus Christ, though he is identified in the records as “Jesus Christian” and “Jesus Cristian.” Ms. Radkey explains the records show that Jesus was baptized by proxy on April 8, 2010, and after initiatory and endowment ordinances, was finally sealed to his “spouse” “Mary Magdelena” on April 9, 2010 – all at the Salt Lake City Temple. The same proxy ordinances were performed for “Mary Magdelena” on the same dates in the same LDS temple.


Ms. Radkey found a record for “Heavenly Father” as well:

“Record 21JV-899 for ‘Heavenly Father’ now shows ‘[Unknown Name] (-) Living.’ The LDS ordinance section of this entry currently reads: ‘This individual is living, and his or her ordinances cannot be displayed. To obtain this information, have the person contact his or her ward or branch clerk.’”

I would be surprised if the LDS Church approved (or would ever approve) proxy temple ordinances for Heavenly Father or Jesus Christ, so please don’t misunderstand me to be suggesting that these records and ordinances had official sanction. However, doesn’t this make you wonder?

■ What led any Mormon to think and act on the notion that Jesus Christ needs proxy temple ordinances like baptism by the “proper authority,” endowments, and temple marriage? According to Mormonism, if Jesus is a god he’s already obtained those essential requirements for exaltation, hasn’t he?
■ Why would Jesus’ mother need proxy ordinances performed on her behalf? If temple ordinances were part of the early Christian church (as the LDS Church claims) wouldn’t Mary have participated in her own ordinances while she was living?
■ What would cause someone to identify Mary’s “husband #1″ as God the Father? Is this the logical conclusion to which a Mormon has come based on the teachings of Brigham Young and other early LDS leaders?
■ As Ms. Radkey asks, “Why was ‘Heavenly Father’ listed in New FamilySearch—not only as the spouse of Mary—but as a living being who could possibly need LDS ordinances?
Does LDS doctrine naturally lead to this kind of thinking about God?

Well be warned, a Mormon will baptize anything dead, even Jesus, which PROVES Mormons are not Christian as most Christians beleive Jesus rose from the Dead. Oppsss yet another Mormon flaw.
Ref
http://www.freerepublic.com/focus/f-religion/2510002/posts
http://blog.mrm.org/2010/07/everyone-needs-lds-temple-ordinances/
http://forums.carm.org/vbb/archive/index.php/t-66638.html
http://www.unexplained-mysteries.com/forum/index.php?showtopic=189999
http://www.goddiscussion.com/31455/lds-church-reaches-agreement-regarding-posthumous-baptisms-other-questions-about-proxy-baptisms-raised/
Posted by Real Mormon Truth at 6:52 AM